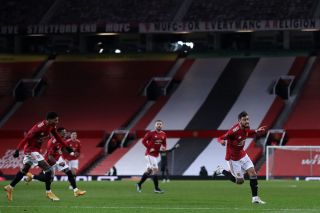 Ole Gunnar Solskjaer said he had confidence that Bruno Fernandes would convert his winning free-kick against Liverpool because of his additional practice on the training ground.

Fernandes fired past Alisson to send United through to the fifth round of the FA Cup after Edinson Cavani was brought down by Liverpool auxiliary centre back Fabinho on the edge of the box.

The Portuguese playmaker was given a rare rest after starting 18 out of 19 Premier League games this season but was required late on as Donny van de Beek faded.

Fernandes provided the decisive moment on 78 minutes and Solskjaer has revealed the midfielder spent extra time at Carrington working on his set-pieces on Saturday.

“When you leave him out like I did today, he stayed about 45 minutes after training yesterday shooting free kicks so I was pretty confident he could score one if he got the chance.

“He’s never happy with me when I tell him to go inside after training when he’s playing the next day so he got some practice yesterday.”

Fernandes has now scored 16 goals in all competitions this season after catching Alisson out at his near post.

His winning goal means Solskjaer’s side will now take on West Ham at Old Trafford in the next round.