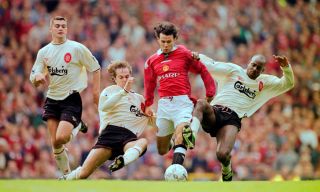 Jason McAteer went on a bit of a social media rant last week, prior to Manchester United’s first meeting with Liverpool this season. A painfully embarrassing one.

I’m not saying professionals shouldn’t express themselves with swear words when I use them every day, but former Liverpool player Jason McAteer‘s foul-mouthed replies to United fans last week were an episode on their own.

It was sort of funny to see an ex-professional lose the rag and sound utterly clueless.

Then for Manchester United to go and knock Liverpool out of the FA Cup.

Scott Patterson, editor and founder of Manchester United blog Republik of Mancunia, brought attention to some quotes from one of McAteer’s little rants after today’s 3-2 win over the Scousers in the FA Cup.

Oi, Jason, is that a false position in the next round for United too? @MCATEER4 pic.twitter.com/CkglO6r4Xh

In a successful attempt to extract the urine, Scott points to his quote about United being in a ‘false position’ at the top of the Premier League.

Does that apply to the fifth-round of the FA Cup, mate?