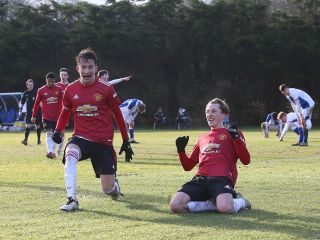 Charlie McNeill topped up his impressive goalscoring tally for Manchester United in the U18 Premier League North to beat Blackburn Rovers in dramatic fashion on Saturday.

McNeill re-joined United in the summer from rivals Man City and already has eight goals to his name this season — after playing just nine league games. (Stats via @StatmanDave)

Charlie McNeil in the U18 Premier League this season:

Settled into the red side of Manchester very well. 🔴 pic.twitter.com/eFCjJLjY1A

That’s a cracking record for a young goalscorer — 8 goals in 9 games — and he netted a brace against Blackburn this morning in wintery conditions, with both goals scored in the first-half.

McNeill’s first goal came in the first minute of the game and his second was also scored inside the first 45 minutes.

The U18s were without several key players who have been involved with the U23s recently — such as fellow striker Joe Hugill, Shoela Shoretire, Will Fish and Willy Kambwala.

Noam Emeran also got his name on the scoresheet for the U18s against Blackburn as United collected their ninth win on the spin.