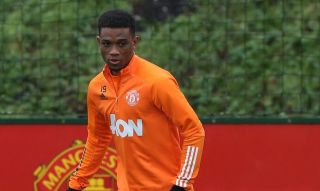 It sounds like Amad Diallo will be involved in the squad tomorrow to face Liverpool in the fourth-round of the FA Cup.

The Ivorian winger only joined up with his Manchester United team-mates for the first time two weeks ago, after agreeing terms with the club on transfer deadline day in the summer.

United had to wait for the former Atalanta starlet to be granted a work permit to work in the UK.

Now he has possession of a work permit, it seems Diallo is ready to hit the ground running for the Red Devils.

Reputable Norwegian journalist Fredrik A. Filtvedt says both team-mates and coaches at United are happy with Diallo’s performances in training and he wouldn’t be surprised if the young winger was in the squad to face Liverpool tomorrow.

That’s a big statement considering another winger by the name Facundo Pellistri joined the club in the summer and has yet to make an appearance in the first team. In fact, our sources are telling us that the Uruguayan may be sent out on loan for the remainder of the season (Valencia still unconfirmed).

We're hearing Facundo Pellistri is set to join Valencia on a short-term loan.

Diallo must be a step closer to the first team and it would be great to see him in action tomorrow, especially in such a crucial game.

Let us know in the comments section if you think Solskjaer will give Diallo his first-team debut against the Scousers?