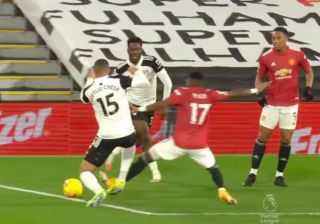 Manchester United are level with Fulham at half-time in their Premier League clash against Fulham at Craven Cottage.

Ole Gunnar Solskjaer’s men are aiming to return to the top of the table with victory and the first 45 minutes has not been without incident in West London.

The Reds fell behind inside five minutes through Ademola Lookman after a pitiful start.

But the reaction was superb and Fulham midfielder Ruben Loftus-Cheek was fortunate to avoid conceding a penalty after a challenge on Fred.

Much has been written about the apparent referee leniency on United penalty decisions but they were hard done by before Edinson Cavani netted the equaliser.

Loftus-Cheek caught Fred in a challenge from behind but no interest was shown from referee Martin Atkinson and his VAR officials.

See the incident below. Footage courtesy of RMC Sport.