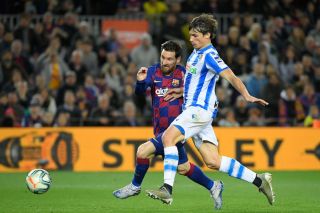 Le Normand, 24, graduated from Real Sociedad’s youth academy in 2019 after joining from French side Brest in 2016.

Since joining his Spanish side, the 24-year-old Frenchman has since gone on to feature in 68 senior matches, in all competitions.

The talented defender who primarily operates as centre-back has emerged as one of La Liga’s most highly-rated defenders.

According to a recent report from Grada3, one of the clubs interested in signing the 24-year-old is Ole Gunnar Solskjaer’s Red Devils.

It has been claimed that in an attempt to bolster their quality options in defence, United may turn their attentions to Le Normand.

The report claims that Real Sociedad who currently sit in fifth place in the La Liga may be open to allowing their star defender to depart.

However, despite Real Sociedad’s willingness to let Le Normand leave, it is believed that it would take a huge offer to prize the centre-back away from the Anoeta Stadium.

Le Normand is understood to have a whopping £67m (€75m) minimum release clause in his contract.

Grada3 claim that United are unlikely to make a move given their current financial situation, which has been hampered by the ongoing COVID-19 pandemic, however, other departures could free up necessary funds.