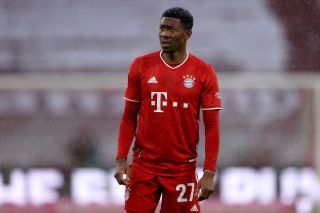 Manchester United are reportedly one of a handful of Europe’s biggest clubs in talks to sign Bayern Munich’s David Alaba.

Alaba, 28, joined Bayern Munich’s youth academy all the way back 2008 and has since grown to become one of football’s most decorated defenders.

The experienced Austrian defender has featured in over 400 matches in all competitions for Bayern Munich’s senior first-team.

During his 13 year spell with the Bavarians, Alaba has had a huge hand in helping his side lift a whopping 25 major trophies, including last season’s Champions League.

However, despite guiding his side to a remarkable treble last campaign, Alaba has yet to agree a contract renewal and looks nailed on to leave next summer, for free.

According to a recent report from football journalist Fabrizio Romano, the 28-year-old is on the verge of joining Real Madrid next summer.

Romano has claimed that Real Madrid were leading the race to sign him and Alaba will soon be a Los Blancos player.

David Alaba’s dream was always to play for Real Madrid. The pre-contract is ‘almost ready’ and agreed since the first days of January, when Real were leading the race. #LFC and #PSG made their bid in December. ⚪️

However, contrary to Romano’s claims, Sky Sports News’ Max Bielefeld has reported that no agreement has been reached between Alaba and Real Madrid.

The 28-year-old elite centre-back is expected to make his final decision in the coming weeks.

Sky sources: There is NO decision about the future of David Alaba yet. Real Madrid made a big offer, but there is nothing agreed. Talks with the biggest clubs in Europe (Real, Barcelona, PSG, City, United ) ongoing. The final decision will be taken in spring #TransferUpdate 1/3 pic.twitter.com/HFDzJJ5dHF