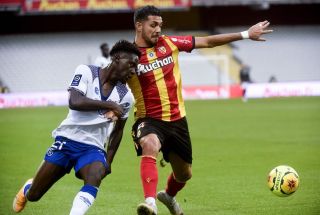 Medina, 21, only joined RC Lens six-months ago after making a £3.15m switch from Club Atlético Talleres, as per Transfermarkt.

Since the young defender’s arrival in France with his newly-promoted side, Medina has gone on to feature in 11 senior first-team matches, in all competitions.

The young Argentinian centre-back who can operate on either side of a defensive paring is quickly emerging as one the Ligue 1’s most reliable players.

However, despite being with his club since last summer, Medina is already attracting the interest of some of Europe’s biggest clubs.

According to a recent report from La Voix du Nord, United are one of the club’s gaining increasing interest in the young defender.

It has been claimed that the 21-year-old left footed centre-back is ‘rapidly’ becoming a transfer target for Ole Gunnar Solskjaer.

The report states that the chances of Medina being allowed to leave in January are ‘slim’.

However, the Red Devils could very soon make an official £10.7m (€12m) offer for the youngster and then offer to loan him back to RC Lens for the remainder of the season.