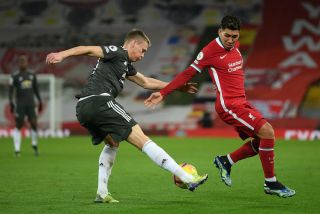 Manchester United and Liverpool have drawn six of their last nine Premier League meetings after Sunday’s stalemate at Anfield.

Both sides will be eager to avoid extra-time in the FA Cup this weekend, so it should make for a more entertaining tie at Old Trafford.

Ole Gunnar Solskjaer is searching for his first piece of silverware as Manchester United manager, and it would be a big boost if the Red Devils could eliminate Liverpool from the FA Cup on Sunday.

You could say Solskjaer has done reasonably well in cup competitions since taking over at Old Trafford, but many will be quick to point out how he’s lost four semi-finals, including the Carabao Cup semi-final against Man City this season.

Also, last season United reached the semi-finals of the FA Cup, only to be beaten by Chelsea six months ago.

United started their FA Cup campaign this season with a 1-0 win over Watford, with Scott McTominay scoring the game’s only goal.

The biggest question facing Solskjaer right now is should he rest players, with Liverpool likely to do the same when they travel to Old Trafford — due to big fixtures coming up.

United are no longer in the Champions League and I’d personally prefer to see us win the FA Cup than Europa League this season. That would be a big statement along with a strong finish in the Premier League.

One bet I really like the sound of this weekend is both teams to score in the first-half, and it may be a good idea to add a United win to that docket, according to this site.

When it comes to Liverpool’s record in this competition under Jurgen Klopp, it is surprisingly poor having been eliminated in round three once, round four twice and in the fifth round last season. They will be looking to fix that this weekend, however, the German coach may be looking to rest some of his key players to help turn their league season around. They have a big game coming up against Tottenham and it’s not one they can afford to drop points in.

Liverpool knocked out a young Aston Villa side in the last round with a 4-1 win. Goals from Sadio Mane (x2), Georginio Wijnaldum and Mohamed Salah saw the Scousers through to the fourth-round.

Manchester United to win 3-1 and both sides to score in the first-half.