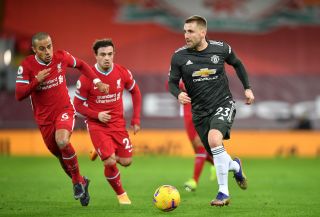 Luke Shaw was outstanding at left-back on Sunday as Manchester United stopped Liverpool scoring at Anfield for the first time since 2018.

The left-back has been at his best this season and speaking to MUTV journalist Stewart Gardner after the scoreless draw, he credited two people for helping him to become a better player.

“I feel really good, obviously big credit to Ole for that for believing in me and pushing me,” Shaw said, as per ManUtd.com.

“Alex [Telles] as well, we have a great relationship and he pushes me each day in training.

“We get on really well. It’s nice to have that type of competition, but we push each other to get the best from ourselves.

“When he plays, I want the best for him, and it’s the same the other way round. It’s a positive way for both of us to look at it and push each other.”

It sounds like Telles is understanding of the situation, which as a new signing wouldn’t always be the case. My thinking behind that is Ole Gunnar Solskjaer likes having two strong options in each full-back role (we’ll hopefully see it on the right side next season with Aaron Wan-Bissaka) and Telles would’ve been quizzed on having such a role in the squad before United signed him.

Shaw also spoke about how he relishes playing against players such as Sadio Mane and Mohamed Salah.

“You always look forward to ones like this because they are going to test you. They are the best in their positions, both of them.

“They are very dangerous, but I think, not just me, we all defended really well today. We need to keep on doing that.”

Although United didn’t have the belief to go an win the game yesterday, Shaw must be feeling confident in himself and his team-mates considering how the Red Devils have turned their Premier League season around from where it was…

“I think, looking back, we didn’t start well at all and we were going to suffer, and we did, but we stuck in and defended well,” he added.

“I feel like towards the end we had the better chances and two chances that on another day we could score. Okay, that happens in football, but a point is better than nothing. Especially, a point here. You can look, in a few weeks, that it’s a very good point.

“I’ll be honest, the dressing room is very flat. It’s not what we wanted. Before the game, we came here to win, we didn’t come here to try and get a point; we came here to win. We felt so confident with the way that recent results have been going for us.

“It wasn’t meant to be, but we pushed towards the end, but a point is better than none.”

A point is better than none — and we’ve just got to make sure we beat Fulham and Sheffield United next. That is what will turn our result at Anfield into a better one!

Read more: Zimbabwe manager accuses Cameroon of WITCHCRAFT after dead bat was found on the field