The attacking duo were limited to substitute appearances in the goalless draw against Liverpool as preferred attackers Marcus Rashford and Anthony Martial misfired at Anfield.

Ole Gunnar Solskjaer could benefit from freshening up his frontline on Wednesday evening and is not short of options in his strong squad.

Scott Parker’s rejuvenated Fulham have lost just one in their last six league games and will provide another test for United as they aim to build on their outstanding away form.

David de Gea was relatively untroubled by Liverpool as United’s defence stood firm and will retain his place in goal with Dean Henderson likely to start the FA Cup fixture against Jurgen Klopp’s side on Sunday.

Aaron Wan-Bissaka was vastly improved at Anfield and will likely start alongside captain Harry Maguire in defence.

Maguire is one game away from suspension but is undroppable under Solskjaer and could rekindle his partnership with Eric Bailly despite Victor Lindelof’s brilliance on Sunday.

Luke Shaw was man-of-the-match against Liverpool but is also at risk of suspension and may be rested as Solskjaer has a ready made replacement available in Alex Telles.

United’s midfield axis of Scott McTominay and Fred were gritty against Liverpool but predictably lacked attacking threat and Solskjaer could return to the Matic-Pogba pivot that was successful against Burnley.

Pogba thrives in a more central role and will be potent if given the freedom to advance by prudent Matic.

Bruno Fernandes and Marcus Rashford could both benefit from a rest after underperforming at Anfield but the duo are vital to Solskjaer and will likely retain their place in the team.

Rashford’s return to a familiar role on the left-flank will allow Cavani to return and lead the line.

Cavani offered a focal point against Liverpool and looks more sharp than Martial who has been ineffective of late.

Mason Greenwood wasn’t afforded enough time to make an impact at Anfield and offers an obvious goal-threat from the right. 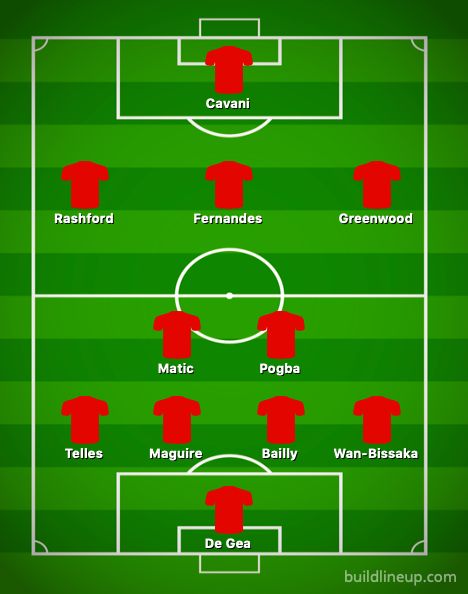