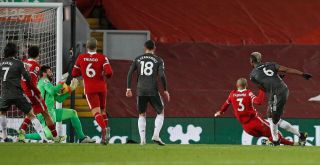 Paul Pogba started against Liverpool at Anfield as Manchester United were held to a 0-0 draw over the weekend.

The Frenchman was asked to play on the right and did a good job keeping Liverpool’s Andrew Robertson quiet.

Ultimately, however, our passing wasn’t good enough. We’d lose possession too quickly but luckily had the appetite to win it back every time.

It’s probably in the back of Pogba’s mind that he’s unlikely to be at United next season, so this could easily be his last chance to win something before departing. He scored the winner last week against Burnley and came close to doing the same versus Liverpool at the weekend.

Last night’s result means United are still first in the Premier League table — but it’s important we beat Fulham and Sheffield United next.

Will Ole Gunnar Solskjaer rest a few players who played at Anfield? Bruno Fernandes and Marcus Rashford looked shattered, but Pogba didn’t have any problems and could be given more responsibility in midfield on Wednesday night if personnel are kept for upcoming games in the league and FA Cup — the Europe League isn’t far away either.

Taking to Twitter some time after the full-time whistle, Pogba said he’s hungry for more with a picture of his effort on goal.