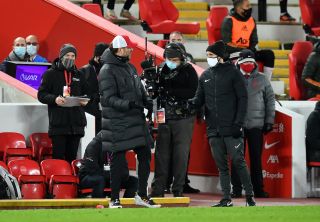 Liverpool couldn’t get beyond Manchester United’s defence on Sunday and Jurgen Klopp spat his dummy out in his post-match media briefing.

It was a top-of-the-table clash with both teams fixated on not conceding the first goal, but Liverpool came out the traps early like they also do when playing United at Anfield.

The game wasn’t awful but it wasn’t a good one either. Still, there’s no denying that Ole Gunnar Solskjaer will be a lot more cheerful than Klopp when he looks at the league table today even though the Norwegian is probably disappointed not to have won the game.

United threatened every now and again, particularly late on after growing into the game after half-time. Allison also made two very important saves to keep United out.

Speaking to the BBC after the game, Klopp commented on the difficulty his side faced against the Red Devils, and he wasn’t a fan of our counter-attacking style.

“The worst thing you can face in the world, in football, is you play against a side with world-class players and they all defend with all they have, deep in the box and only counter-attack,” Klopp said.

Liverpool are now positioned fourth in the league table — sat behind United, Man City and Leicester. I hope they stay there or drop even lower!