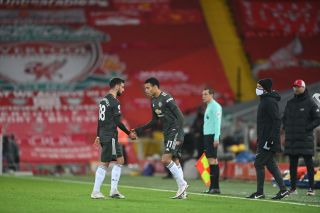 Manchester United drew 0-0 with Liverpool at Anfield at the weekend and Bruno Fernandes struggled to make an impact in the game.

It’s not like the Portugal international to offer nothing in a game, but he looked like a player who needed a rest which is probably not something he wants to hear from manager Ole Gunnar Solskjaer.

Fernandes had a chance to win the game only for a fine save from Alisson keeping the scoreline level.

He was replaced towards the end of the match in place of Mason Greenwood, but appeared to react angrily to the decision as neither team were able to make the breakthrough.

Throughout the game there was a battle going on in the middle of the pitch between Fernandes and Liverpool midfielder, Thiago Alcantara, but unfortunately the United man wasn’t at his best on the day.

After the match, the 26-year-old broke his silence and took to social media. He posted in Portuguese — but it translates as: “One day, when you look back, you will see that the most beautiful days were those you fought on. #MUFC #ManUtd.”

The draw on Sunday will be seen as an important result if United can beat Fulham and Sheffield United next. Will there be a chance to rest Fernandes in one of those games? The Cottagers already have two players suspended for Wednesday’s game.