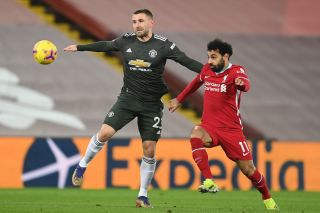 Luke Shaw had a superb game for Manchester United as Ole Gunnar Solskjaer’s side emerged unscathed from their Anfield test.

United were beaten 2-0 by a dominant Liverpool side en route to the title in the corresponding fixture a year ago — almost to the day — but came away with a hard fought point and could even have won it if not for the intervention of Alisson. It shows the extent of the strides made in the last year that there will be tangible disappointment at the draw.

But Solskjaer will be the happier manager as the Reds retained both top spot and their advantage over the Scousers. Most United fans would have taken a point before the game against a side unbeaten in 67 matches at home. But, with no recognised centre-back and an opponent in indifferent form, you felt Liverpool were there for the taking.

Yet, whilst the Reds were solid and well organised with excellent performances from all of the defence and Paul Pogba, United never seemed to really believe they could go to Anfield and win. Bruno Fernandes and Pogba both had chances, but Solskjaer’s side often lacked the conviction to go for it. The progress is there for all to see, with United’s three point gap over the Anfield side and world away from the yawning 30-point chasm of last season. But this match showed that this side is quite there, yet, in terms of a title winning one. Avoiding defeat was the main objective but champions-elect perhaps win this. The team didn’t believe in themselves enough.

There was clear intent from Solskjaer to try and turn one point into three, judging by the fact Edinson Cavani and Mason Greenwood (the latter albeit very late) came on from the bench, but only in the very latter stages did United mount any sustained attacks to win it, despite the fact Liverpool had midfielders Fabinho and captain Jordan Henderson at centre-back and came into the fixture without a goal in their last two league outings.

Shaw was once more handed the task of shackling Mohamed Salah and did so expertly, pushing the Egyptian to the fringes and then dealt superbly with Sadio Mane once Klopp has switched wingers in an attempt to unlock the resolute left-back. Shaw looked United’s best outlet going forward with his link play and driving runs, standing tall to lock down his flank and force Liverpool through the middle.

Since the arrival of Alex Telles, adding competition and making him fight for his place, Shaw has been magnificent. An early contender for our Player of the Season. I struggle to remember a better individual performance from a United player at Anfield in recent years, and this was one of our no 23’s finest showings in the Red of United.