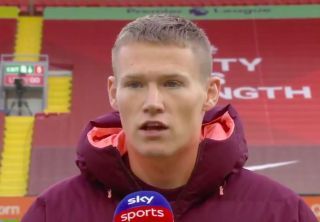 Scott McTominay insists there is nothing but ‘excitement’ in the Manchester United dressing room ahead of their blockbuster clash against Liverpool at Anfield.

United can go six points clear of their oldest rivals with victory on Merseyside, but Jurgen Klopp’s side haven’t lost a league game at home since April 2017.

McTominay returns to Ole Gunnar Solskjaer’s starting lineup after being rested for the midweek victory over Burnley at Turf Moor.

The Scot starts in a familiar midfield axis with Fred with Nemanja Matic dropping to the bench.

Paul Pogba retains his place but will likely operate from the left-flank, with Marcus Rashford, Bruno Fernandes and Anthony Martial making up an exciting attacking quartet.

United’s trip to Anfield is undoubtedly their biggest game of the season and its important Solskjaer’s side avoid defeat to build on their momentum at the summit of the Premier League.

Despite the game’s magnitude, McTominay has reiterated that his side need to enjoy the experience and there is an overwhelming feeling of excitement within the dressing room before kick-off.

🗣 "We know the challenge we have ahead, it's about embracing it and enjoying it"