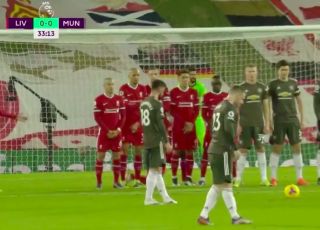 Bruno Fernandes came closest to giving Manchester United the lead in the first-half against Liverpool at Anfield with a well-struck free-kick.

Ole Gunnar Solskjaer’s side were deluged in the opening half hour on Merseyside but Liverpool weren’t clinical in the final third and United have grown into the game.

The Reds have to be more incisive in possession in the second-half if they are to get the result they crave against Jurgen Klopp’s champions.

Despite being dominated early on, United almost took the lead against the run of play after 34 minutes when Luke Shaw was upended following an ambitious run to the end of the box.

Fernandes stepped up for the subsequent free-kick and made great connection but the ball curled just wide of Alison’s post.