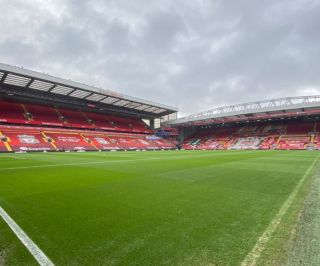 Pre-match goosebumps and stomach pains? That has been my pre-match experience ahead of these games since I was as young as 10… possibly younger!

Gary Neville has just arrived at Anfield ahead of Sunday’s mega-clash between Liverpool and Manchester United at Anfield.

The Red Devils moved to first in the league after beating Burnley 1-0 on Tuesday night and today could go six points clear of Liverpool with a win.

Neville is at Anfield for Sky Sports and knows he needs to remain professional, but we can expect a few laughs at either Neville or Jamie Carragher’s expense by the end of the day.

Upon arrival, Neville took a picture of the surface the players will be playing on this evening (KO 4:30pm UK time) and invited you all to join him on Sky Sports for match build-up and coverage.

Liverpool v United 4.30ko @SkySports . Join us if you like ❤️ pic.twitter.com/F9ROWts6ly

I hope it’s a day to remember for United.