Manchester United are set to travel to arch-rivals Liverpool in a tense Premier League clash on Sunday. Both sides will come into Sunday’s game occupying the league’s two top spots with the Red Devils currently three-points clear.

Ahead of Sunday’s clash which is scheduled to kick-off at 4.30pm UK time, we have predicted how we expect Ole Gunnar Solskjaer to line his Red Devils up.

United’s number-one will line-up against Liverpool, no question.

One of the easiest picks. Wan-Bissaka is clear of anyone else in the United squad when playing at right-back.

The young English defender will be tasked with keeping Sadio Mane quiet.

First name on the team sheet at the moment. Bailly is enjoying a hugely impressive spell in form.

I would be very surprised to see Solskjaer drop his first-choice left-back despite Shaw having a relatively quiet game last time out.

A midfield duo of McTominay and Fred is likely to be Solskjaer’s preferred option.

I fully expect the Brazilian to work alongside McTominay in order to break up Liverpool’s playmaking duo of Thiago and Gini Wijnaldum.

In brilliant form of late and scored the winner against Burnley on Tuesday. Confident Pogba will start again on Sunday.

Despite a quiet match against Burnley I still think Fernandes’ presence on the pitch is undroppable.

I fully expect to see Solskjaer name the Portuguese Magnifico as his number-10.

A midfield diamond will only allow for two up the top and I expect it to be a pairing of Rashford and Edinson Cavani, especially considering Anthony Martial picked up a minor knock against Burnley.

Time to write your name in the United folklore, El Matador. 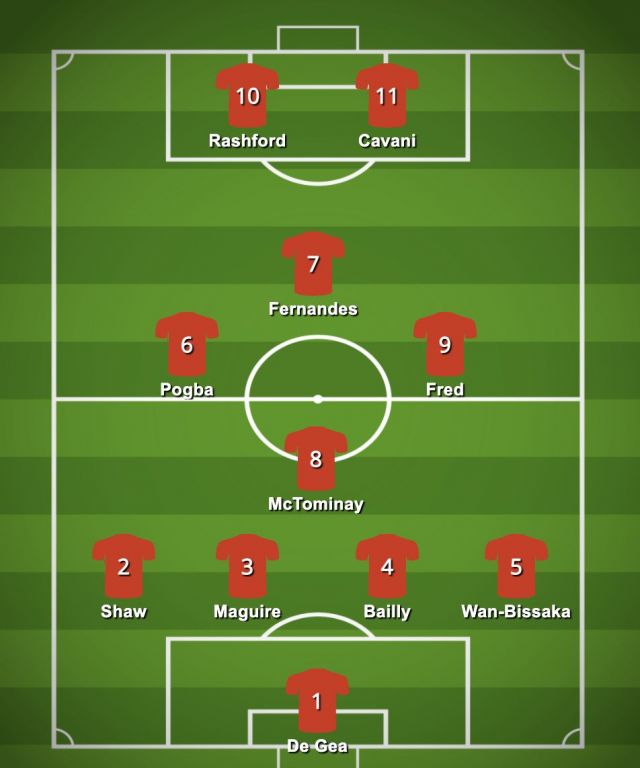