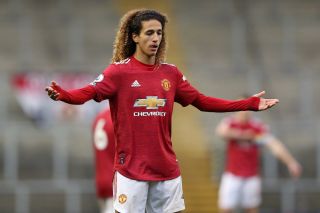 Manchester United’s FA Youth Cup tie vs Salford City on Wednesday night has been postponed as the competition has been halted due to the COVID-19 pandemic.

It’s a blow for Neil Ryan’s in-form side as they’ve been preparing for the third-round clash, which would’ve been the Under-18s first fixture of the year, but it has now been postponed to a later date.

The FA said, as per ManUtd.com: “We can confirm our decision to temporarily suspend the 2002-21 FA Youth Cup and have discussed this with the Department of Digital, Culture, Media & Sport and the competing clubs.

“The health and wellbeing of players and staff are of paramount importance and we intend to resume the national competition and it is deemed safer for clubs to travel.

“The FA Youth Participation & Development Committee, which is responsible for management of the competition, will continue to review the situation and we will provide further updates at the earlier opportunity.”

United haven’t won the FA Youth Cup since 2011 — when Paul Pogba and Jesse Lingard were in the starting XI, and it’s something I’m sure the club want to rectify in the coming years with Ole Gunnar Solskjaer looking to build his squad with youngsters.

More updates when we have it.