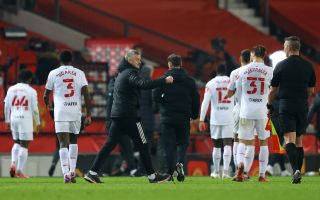 Manchester United will be looking to climb to the top of the Premier League table on Tuesday night when they take on Burnley at Turf Moor.

The Reds go into the game on the back of a 1-0 victory over Watford in the FA Cup third-round whilst the hosts also progressed to the next round after defeating MK Dons on penalties.

Head coach Ole Gunnar Solskjaer is widely expected to make a host of changes to the team which faced Watford at the weekend with David de Gea, Marcus Rashford, Anthony Martial, Bruno Fernandes and Harry Maguire all likely to return to the starting eleven.

Few if any could have foreseen Manchester United sitting on top of the table a few months back but that could soon become a reality on Tuesday night. The Reds only need a point to overtake Liverpool at the top and with Burnley struggling for form down at bottom of the table this is a game which United should take be taking maximum points from.

The club’s away form has been impressive this season and should the Reds turn up and play like they have done in previous away games against Paris Saint-Germain, Everton, Newcastle and the likes then United should have too much for Burnley and take all three points.

United have a real chance of winning the Premier League title this season and with games coming thick and fast it’s vital that the Reds gather some winning momentum for the coming months ahead.

Inconsistency has remained the clubs biggest issue so far this season but if Solskjaer can fix that it will go a long way to helping United’s title charge in the second half of the season.