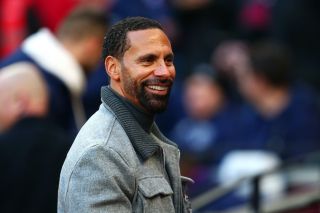 Rio Ferdinand believes Scott McTominay has proven to Ole Gunnar Solskjaer that he can be a mainstay in the Manchester United starting lineup.

McTominay captained United for the first time in their 1-0 FA Cup win over Watford at Old Trafford, scoring the winning goal and highlighting his leadership credentials.

The 24-year-old academy graduate headed in from Alex Telles’ corner early on to ensure United’s progression through to the fourth round.

McTominay’s importance is growing in Solskjaer’s squad and Ferdinand believes the Scot has the qualities to have a long career in United’s midfield.

“You can see in the way he conducts himself but more importantly the way he plays out on the pitch he’s wholehearted,” Ferdinand told BT Sport, as quoted by the Metro.

“He covers the ground well, he takes responsibility in situations and you need all that as a captain,’

“You need to be somebody who people can look at and he seems to have those sort of traits.

“He has the credentials to be a mainstay in this team and be an important member of this team for years and years to come because of the way he applies himself.

“It’s not just about footballing ability sometimes, there’s more to it than that, your mental capacity to take things on board but also the ability to accept responsibility and be the man that people look to for inspiration.

“He’s almost certainly now become one of the main players in that midfield area and he’s someone I think Ole could build around.

“He’s not the one who you’d say is the most imaginative or the person you’d say has got the most skills, but there’s other things that he brings to the game that other players don’t bring, that intensity, that work rate, the effort, and importantly the responsibility he takes on.”

Handing McTominay the armband for the first time, albeit in a side consisting of nine changes, was an ultimate show of faith from Solskjaer in a player who has matured this season.

He has become a regular in Solskjaer’s preferred midfield axis and is expected to start again as United aim to move top of the league against Burnley on Tuesday.

McTominay could resume his partnership with Fred at Turf Moor, with Solskjaer confirming that Paul Pogba has picked up an unspecified injury.