Ole Gunnar Solskjaer has a number of selection concerns ahead of Manchester United’s Premier League clash against Burnley at Turf Moor.

United can go top of the Premier League heading into Sunday’s Anfield showdown with champions Liverpool if they avoid defeat.

Solskjaer made nine changes in the uninspiring 1-0 FA Cup win over Watford but focus is now firmly on the league ahead of a decisive week in United’s season.

The United boss confirmed in his post-match press conference on Saturday that Paul Pogba, Luke Shaw and Victor Lindelof were all missing through injury.

Solskjaer says Pogba, Shaw and Lindelof are all injured. #mufc

But the impressive squad depth now means Solskjaer can be flexible in his team selection regardless of whether the first-team trio are passed match fit.

Alex Telles could retain his place at left-back if Shaw is ruled out and Harry Maguire and Eric Bailly could resume their central defensive partnership.

Bailly was forced off against Watford but confirmed to supporters on social media after the game that he was ‘OK’ after a nasty collision.

Aaron Wan-Bissaka is set to return at right-back after being rested in Saturday’s game.

Scott McTominay led by example on his first game with the captains armband and could retain his place in a midfield axis with Fred.

Indispensable Bruno Fernandes was not required against Watford and will be raring to go supporting Marcus Rashford and Anthony Martial in attack.

Mason Greenwood was quiet in a central role but could return to the right-flank. Alternatively, Solskjaer may opt to play Rashford on the right and give Pogba a free role from the left if he is available after an unspecified injury. 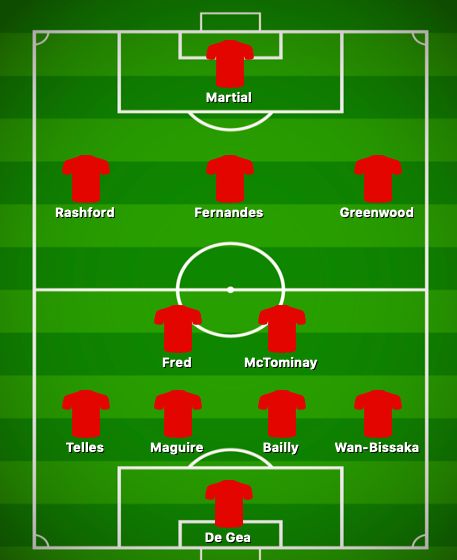