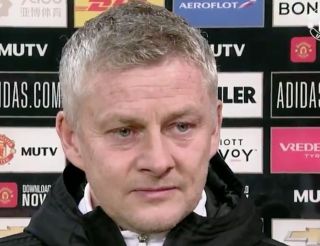 Ole Gunnar Solskjaer spoke to MUTV before his Manchester United side take on Watford in the third-round of the FA Cup.

The Manchester United manager made plenty of changes to his starting line-up and it’s an opportunity for several players to show why they want or expect more minutes in the first-team.

Every game Dean Henderson plays for United is an audition for his long-term hopes of being number one. First he’s got to show that he’s better than current first choice goalkeeper David de Gea.

Donny van de Beek also gets a rare start with Juan Mata, and Daniel James being another fringe player gets a chance to shine.

Check out Solskjaer’s pre-match interview below:

He urges the players starting tonight to show what they can do after training hard at Carrington all season.

Hopefully we see it come together nicely tonight and United progress to the fourth-round.

Solskjaer reckons Watford are one of the best sides in the Championship where they are currently placed sixth.