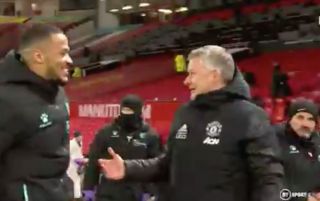 Ole Gunnar Solskjaer made plenty of changes to his Manchester United side on the night. Dean Henderson started between the sticks, Brandon Williams was trialled at right-back and Donny van de Beek got another chance to show the manager what he’s all about.

There will be critics who say United didn’t impress on the night but we got our goal through Scott McTominaty early in the game, controlled throughout and didn’t concede many dangerous chances at the other end.

The manager ought to be happy with the performance and result given a number of fringe players were given a chance to shine and we came out of the game with a placed booked in the next round.

No wonder Ole was all smiles at full-time.