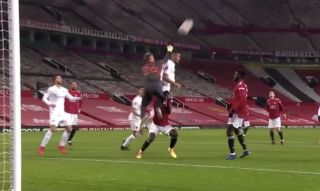 The defensive pair, who were named in a much changed United starting line-up have both been enjoying a decent first-half against Championship side Watford.

However, Ole Gunnar Solskjaer will undoubtedly be concerned for his commanding Ivorian centre-back after keeper Henderson went flying into him during a Watford set-piece.

Upon closer inspection you can see just how bad of a collision this one looked.

Bailly went off to receive treatment, but after being ruled out on the grounds of concussion, Harry Maguire was soon introduced.