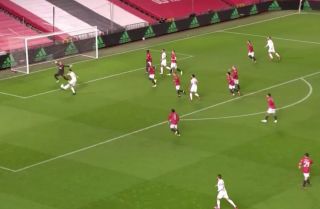 Axel Tuanzebe was alert enough to spot an area of danger as Manchester United hang on to their 1 goal lead against Watford in the third-round of the FA Cup.

The 23-year-old defender comes back into the side, with Ole Gunnar Solskjaer urging his fringe players to take their opportunity against Watford.

Manchester United are certainly up for it and have had some decent spells in the first-half.

Scott McTominay opened the scoring thanks to a perfect corner from Alex Telles.

But there was a moment of danger when the ball deflected off Dean Henderson and had to be cleared by Axel Tuanzebe. Otherwise, Watford would’ve equalised.