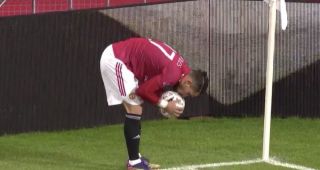 The two sides who met on Saturday evening at Old Trafford came into the match hoping to secure their place in the illustrious competition’s Fourth Round.

However, after naming a much changed side, it has been Ole Gunnar Solskjaer’s Red Devils who have struck first.

An early corner saw left-back Alex Telles give the dead ball a good-luck kiss before whipping in a ball that captain Scott McTominay gratefully headed home.

United have started the game very well and will be looking to double their lead as quickly as possible.