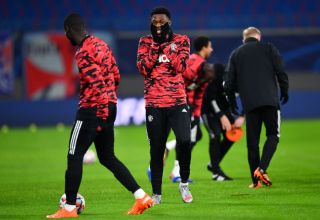 The Netherlands International will be allowed to leave Manchester United this month, as confirmed by Ole Gunnar Solskjaer on Friday.

Fosu-Mensah, 23, joined United from Ajax’s academy as a 16-year-old so he’s been part of the club for seven years and will have lots of experience under his belt as a result.

He made his debut as an 18-year-old against Arsenal in February 2016 — a game which saw Marcus Rashford score twice on his Premier League debut.

Rashford kicked on and quickly became a star in the first-team, whereas it didn’t quite work out that way for Fosu-Mensah. He spent time out on loan at Crystal Palace and Fulham, but never hit the ground running as both clubs were going through difficult times and changing managers way too often.

The Dutchman has had his problems with injuries too.

“I’m not sure if Timo is going to stay or [if] he’s going to take an option now,” Solskjaer told reporters, as per the Daily Mirror.

“He’s not played enough, so of course he’s been allowed to speak to clubs, with a view to leaving now in January. It’s difficult when you’ve got good players, talented players, and you can’t give them game time. He’s now at the stage where he needs to go and play again.

“It might be [at the] end of January, or it might be in the summer that he finds somewhere else. So he’s working hard, Tom, he’s ready for a move for any club that he feels ready for.”

Fosu-Mensah’s contract expires at the end of the season.

On top of that, Solskjaer confirmed that Marcos Rojo and Sergio Romero will be gone by the summer.