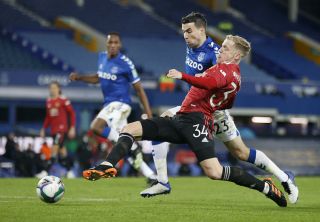 Ole Gunnar Solskjaer says he has told Donny van de Beek that he is highly-rated at Manchester United despite not getting as much game time as expected.

The 23-year-old joined the Red Devils from Ajax for £35m in September, but he’s played 20 games this season and only started in the Premier League twice.

Solskjaer confirmed Van de Beek would start against Watford in the FA Cup third round at 8pm tonight. On top of that, the manager says he needs ‘a little bit of time’ before he gets more regularly into United’s starting XI.

Moreover, the Norwegian is understandably sick and tired of the constant questioning over Van de Beek.

“I’ve answered this question so many times,” Solskjaer said, as per Manchester Evening News.

“There’s so many examples of players needing a little bit of time, quality players. We have many examples ourselves and there are other clubs with examples. Sometimes it takes time.

“You don’t expect people who care for him to be quiet at times, especially when they want the best for them.

“Donny is going to play [against Watford]. That’s another chance for him and, yes, I’ve spoken to him and reiterated and made him aware of how much we rate him.

“But he’ll play tomorrow and that’s a good chance again to kick on.”

United have managed to turn their season around as far as our league form is concerned, and that comes from Solskjaer picking the right teams each week. I find the constant discussion over Van de Beek tiresome because the manager has said time and time again that his chance will come.

So, sit back and enjoy the ride. Van de Beek will grow into this United side.