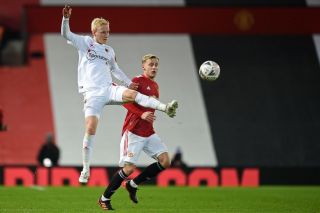 The Dutchman did exactly that while operating in a deeper midfield position than the role he’d prefer.

Van de Beek is brilliant in tight spaces and Solskjaer credits him on that in his post-match press conference, as seen below.

Fans will be asking how long must we wait until Van de Beek is playing regularly, but I don’t think anyone can complain when we’re winning football matches.

The league table looks good right now and it will look even better if we beat Burnley on Tuesday night.

I would expect Bruno Fernandes and Fred to come back into the starting line-up versus Burnley.

Paul Pogba was another player left out tonight albeit due to injury.