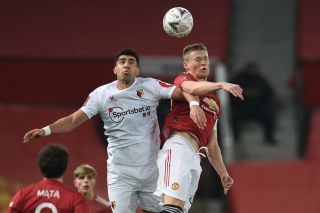 Scott McTominay did the captain’s armband justice before Harry Maguire came off the bench and took it from the Scotland international following Eric Bailly’s injury.

It may be too early to say just yet but Scott McTominay looked like captain martial as Manchester United booked their place in the fourth-round of the FA Cup.

Watford didn’t create many chances as United controlled the game throughout.

An early goal from McTominay didn’t knock the stuffing out of the Hornets, but they failed to respond and crashed out of the competition after losing 1-0.

The goal was a thing of beauty as Alex Telles’ corner kick was converted by McTominay’s header – it bounced off the ground and into the corner of the net.

But McTominay didn’t get the man of the match for simply scoring the game’s only goal.

While Donny van de Beek also deserves recognition for being one of United’s best performers on the night, you can’t argue McTominay’s MOTM award when you see his

Captain fantastic on the night!