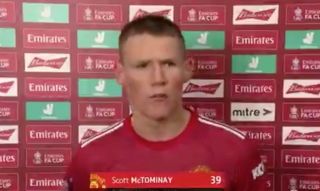 Scott McTominay was bursting with pride on Saturday night after leading Manchester United into the fourth-round of the FA Cup.

The Scotland international scored the game’s only goal at the very start with a glorious header to convert a corner from Alex Telles.

His game by numbers are seriously impressive, as seen here, and he deserved his man of the match award.

It was a night to remember for McTominay even before a ball was kicked because it was the first time he captained the side. And, to make it one to remember makes it more special.

The midfielder spoke to BT Sport after the match and spoke proudly about being captain on the night and loving the club he plays for.

He said it was a “surreal moment” when Solskjaer told him he would given captaincy.

McTominay added: “I absolutely love this football club and it’s been my whole life.”

"When the manager told me it was a surreal moment."

"I've been at this club since just turning five years old."

"I absolutely love this football club and it's been my whole life."

Scott McTominay on captaining Man Utd for the first time 🙌

McTominay knows what it means to be a United player.