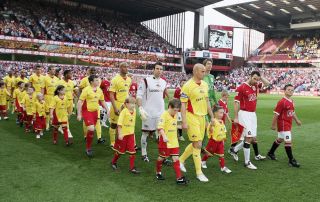 The FA Cup returns to Old Trafford this Saturday as Manchester United take on Watford in the third round.

It has been a disappointing week for the Red Devils as Ole Gunnar Solskjaer’s semi-final conundrum continued with Manchester City eliminating United in the semi-final of the Carabao Cup. The FA Cup provides United boss Ole Gunnar Solskjaer and his United side the perfect opportunity to get back to winning ways against Championship side Watford and win their first trophy under the Norwegian. Despite the disappointing result against City on Wednesday night, the Red Devils have enjoyed an excellent start to the season in the Premier League and are mounting an unlikely title challenge against Champions Liverpool.

Manchester United were knocked out of the FA Cup last season by Frank Lampard’s Chelsea and will hope to go one step better this season. Watford are back in the Championship after finishing 19th in the Premier League last season which resulted in the Hornets being relegated. The Hornets are currently sixth in the Championship in the play-off places as they aim to gain promotion back to the Premier League at the first attempt. The erratic chopping and changing of managers at Vicarage Road has continued and the Hornets are currently on their second manager of the season already. Vladimir Ivic was appointed as manager of Watford in the summer but was sacked surprisingly only four months into the season. Ivic was dismissed as manager despite the Hornets winning nine of their first twenty Championship games; he was replaced by new head coach Spaniard Xisco Munoz.

Manchester United have come up against Watford six times previously in the FA Cup. The Red Devils have won four times, drawing once and losing once against the Hornets in the six previous cup ties. The first time Watford faced against United in the FA Cup was at Vicarage Road in 1950 with the Red Devils winning 1-0 with the great Jack Rowley as goalscorer. The Hornets most famous FA Cup victory came in 1982 at Vicarage Road when they defeated United 1-0 with Dutchman Jan Lohman scoring the winner.

The most recent FA Cup tie between the sides was the 2007 semi-final at Villa Park where the Red Devils hammered the Hornets 4-1. United progressed to the final with victory over Watford in the semi-final, they were eventually defeated 1-0 in the final by winners Chelsea. This Saturday’s third round fixture at Old Trafford will be the seventh meeting between the sides in the FA Cup as both sides look to progress to the next round of the cup this season.

The Red Devils have a long and illustrious history in the FA Cup winning it an impressive twelve times and appearing in 19 finals. During Sir Alex Ferguson’s 27 year reign at Old Trafford Manchester United won five FA Cups, as part of the infamous 1999 treble. United are the only club to appear in an FA Cup final in every decade since the war. Manchester United claimed their first FA Cup in 1909 beating Bristol City 1-0 at Crystal Palace with the goal coming from Scotsman Sandy Turnbull. It was 54 years before the Red Devils won their second FA Cup which was United’s first piece of silverware after the Munich air disaster with a 3-1 victory over Leicester City. Dennis Law scored once and David Herd grabbed two in a comfortable victory for United at Wembley Stadium in front of 99,000 fans.

The late great Tommy Docherty delivered Manchester United their next FA Cup trophy 1977 when they bet the arch nemesis Liverpool 2-1 to deny the Scousers the opportunity to win the treble. United won 2-1 with English man James Greenhoff grabbing the winner in the 55th minute to clinch Manchester United’s third F.A Cup. The 1980’s saw Manchester United become a cup side as they struggled for form in the league and manager Ron Atkinson delivered two FA Cups during his tenure at United in 1983 and 1985. The Red Devils defeated Brighton in 1983 4-0 at Wembley in the replay with the goals from Bryan Robson (x2), Norman Whiteside and Arnold Muhren. The 1985 FA Cup was decided a fantastic goal scored by Norman Whiteside in extra time against Everton as the Red Devils clinched their fourth FA Cup. During Sir Alex Fergusons 27-year reign at Old Trafford he guided United to a record five FA Cup successes with his first trophy at the club finally arriving in 1990. The Red Devils beat Crystal Palace 1-0 at Wembley Stadium after a replay with left back Lee Martin scoring the deciding goal.

Manchester United in 1994 and 1996 completed the league and FA Cup double winning finals against Chelsea and Liverpool respectively to win their sixth and seventh FA Cups. Sir Alex Ferguson’s next FA Cup triumph came in 1999 when United completed the second part of an historic treble with a 2-0 win over Newcastle with the goals coming from Teddy Sheringham and Paul Scholes.

Manchester United struggled for the first few years of the 00’s whilst Arsenal dominated English football before reaching their next final in 2004. Sir Alex Ferguson’s side demolished first division Millwall 3-0 at the Millennium Stadium in Cardiff. The goals were scored by club legend Ruud van Nistelrooy (x2) and youngster Cristiano Ronaldo. Manchester United ended their 12 year FA Cup drought in May 2016 under Louis van Gaal’s guidance at Wembley against Alan Pardew’s Crystal Palace. The game went to extra time after finishing 1-1 in normal time before academy graduate Jesse Lingard scored a stunning winner to claim the FA Cup trophy for the 12th time in Manchester United’s illustrious history.

The Baby Faced Assassin won two FA Cups with Manchester United in 1998/99 and 2003/04 under the genius of Sir Alex Ferguson. The Manchester United boss Ole Gunnar Solskjaer will be hoping his experience of winning the cup will help his United side progress as they look to challenge and win their first FA Cup in five years. It has been a disappointing week for United with defeat in the semi-finals of the Carabao Cup to City but a convincing win over the Hornets will have United fans dreaming of another cup run in the most famous club competition in world football.