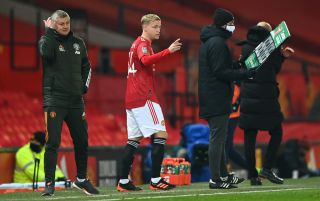 Manchester United will be looking to book their place in the fourth round of the FA Cup when they take on Watford at Old Trafford on Saturday night.

The Reds go into the game on the back of a disappointing 2-0 defeat to Manchester City in the league cup semi-finals whilst the visitors were defeated 2-1 by Swansea City in the Championship.

Head coach Ole Gunnar Solskjaer is widely expected to make a host of changes to the team to face Watford with Van De Beek, Mason Greenwood and Juan Mata all pushing for starts.

Losing to Manchester City midweek was a bitter pill to swallow for the Manchester United faithful. It was a game that passed the Reds by and with Wembley so close it was disappointing to see United bow out of the competition in the manner which they did, but in facing Watford on Saturday night it provides the Reds a fantastic opportunity to bounce back.

The draw has been kind to United and although facing Watford won’t be a walk in the park, this is still a game even with a lot of changes to the starting eleven expected that I expect United to win comfortably.

The FA Cup provides the club with arguably the best chance of winning a trophy this season and its vital United beat Watford to not only progress to the next round but to gather momentum for the coming months ahead.

Despite exiting the league cup midweek it must still be remembered that United still find themselves in the hunt for three trophies this season with the notable reminder that United are currently sitting locked level on points with Liverpool at the top of the table and if Solskjaer can sort out the inconsistency which has so far plagued the Reds season then he has a real chance of making this season one to remember.