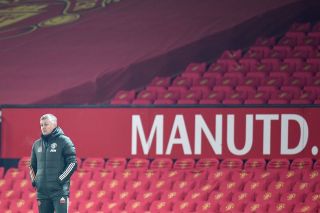 As the prospect of Wembley opened out before them, Manchester United blinked again with the finishing line in sight and glory within touching distance.

This was a performance considerably better that the last three semi-finals, but a night that had begun with such optimism ended in familiar fashion – with Ole Gunnar Solskjaer’s side again forced to count the cost of failure at the penultimate hurdle.

The last time United and City met with silverware at stake, Pep Guardiola’s City slickers were 3-0 ahead and rampant en route to Wembley glory as even a United fightback in the second leg proved unable to stop them securing a third successive League Cup triumph. This time, though, the Reds were perhaps marginal pre-match favourites to progress. The one-legged nature of the tie appeared to favour us, United were the form team and City – despite an ominously impressive showing at Chelsea – hadn’t quite yet hit their stride. It felt different, but ultimately, it wasn’t.

This time, at least, Solskjaer and United can point to the fact they created chances and defended well to hold our neighbours at arm’s length in a tight game that could have gone either way, balanced as it was on a knife edge for so long.

It was a performance much improved from the one a year ago, at least until John Stones opener prompted City to turn on the style and their considerable firepower came to the fore. Even considering United’s legendary powers of recovery, there was to be no way back. Given United’s prominence in what looks to be a title race for the ages, this perhaps did not sting as much as it otherwise may have done.

All that counts for little, though, as United were left to rue a fourth successive defeat at this stage of a tournament in the space of a year. For context, Sir Alex was in charge for 26 years and lost only six last four encounters. To lose one semi final is perhaps unfortunate. Two, careless. Three? Unforgivable. But four? Something simply isn’t right.

Until potential is turned into prizes, questions will continue to be asked over Solskjaer’s suitability for the biggest of jobs. Those questions will only get louder and greater the longer this trophy drought goes on.This hoodoo will hang over United and will go one of two ways. Either we will eventually break the curse, or the opportunities will continue to dry up. Again this was a chance for us to demonstrate progress but, again this side fell short when it mattered most – the biggest question is whether the team have what it takes to be winners. Falling at the penultimate hurdle is quickly and unpalatably becoming United’s raison d’etre – music to the ears of the Solskjaer doubters silenced by United’s recent uptick in form as the Reds have surged into title contention.

It seems harsh to be ultra critical on the Reds given the fact I thought we played well and City can do that to any team in world football when in the mood, but it has become too big a problem to ignore.

It brings me back to an article, written by yours truly and penned on these very pages, after our Europa League knockout at the hands of Sevilla.

In the piece, Stretty News discussed United’s inability to get over the line in big games, a tendency to go into their shell when the pressure in really on, and how the Reds needed to shred their tag as perennial nearly men after becoming the first side to reach – but lose – three semis in a single season. We looked at how Manchester City had the winning mentality, the nous and the canniness needed to take that final, trophy winning step. Four months on, and that remains the case.

Not only were United again pipped to a place at Wembley by their neighbours, but they were dealt a nasty double whammy.

For all the premature but understandable excitement of a title challenge, and the birth of #21iscoming on social media, City showed why they – and not United – should be considered as Liverpool’s closest challengers for this season’s title. For all the dreams of a Bruno-Fernandes encrusted, golden plated Premier League, City dealt us a reality check. Of course, as we speak, United are well and truly in the fight and will go top if we avoid defeat at Burnley on Tuesday. But City look better equipped to last the course and they’ve been there, done it and got the proverbial T-shirt. That counts for a lot when the going gets tough. United still have a long way to go and this group of players have never been in this position before.

Solskjaer insisted afterwards that the issue is not one of mentality, but rather City were simply better, as per BBC.

That may be true, but even the most mentally strong squad must have doubts creeping in when the same issues persistently resurface. It’s got to the point now where it must be a psychological issue as much as anything else.

One response to “Opinion: Manchester United becoming the nearly men”