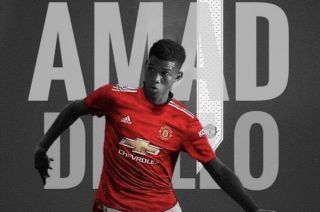 Amad Diallo has been officially confirmed as a Manchester United player!

Diallo, 18, agreed to join United during deadline day of last year’s summer transfer window, however, due to work permit and passport complications, the teenager was forced to wait six-months to see his move finalised.

The initial agreement between Atalanta and United was announced on the club’s official website.

The young Ivorian attacker who primarily operates as a right-sided winger has emerged as one of Europe’s most gifted prospects and already has four senior Serie A appearances to his name.

Prior to departing Atalanta, Diallo had racked up a huge 61 direct goal contributions in just 93 youth team appearances.

The news that Diallo was on his way to Manchester to complete his long-awaited transfer reached fans last weekend.

However, despite having to stop off at the Ivory Coast’s embassy in Rome, the Red Devils have finally confirmed Diallo as their latest signing.

A club statement on ManUtd.com read:

“Manchester United is pleased to confirm Amad Diallo’s arrival from Atalanta has been finalised. The Ivorian winger has signed a contract to the end of June 2025, with the option of an extra year.

“When an agreement between the clubs was first announced on 5 October 2020 – deadline day at the end of the summer transfer window – it was subject to a medical, work permit and personal terms.

“These steps in the process have been completed, and an application has been made for a visa. Once this has been issued, Diallo will be cleared to travel to Manchester and to train with and play for Ole Gunnar Solskjaer’s side.

“Diallo featured twice for Atalanta’s first team earlier this season, both as a substitute in home games. He played the last 10 minutes against Hellas Verona in Serie A on 28 November, and then faced FC Midtyjlland a few days later in the Champions League, coming on in the 68th minute.

“The 18-year-old, who played regularly in Atalanta’s youth ranks, made a total of five senior appearances for the Italian club and scored one goal, on his debut against Udinese in October 2019.”

Manager Ole Gunnar Solskjaer also took some time to issue the youngster with a personal welcome, the Norwegian said: “As a club, we have followed Amad for a number of years and having watched him myself, I believe he is one of the most exciting young prospects in the game.

“Manchester United has such a proud history of developing young players and everything is in place to enable Amad to reach his potential here.

“It will take time for him to adapt but his speed, vision and fantastic dribbling ability will stand him in good stead to make the transition. He is a player with all of the raw attributes that are needed to be an important player for Manchester United in the years to come.”

Addressing his recent transfer to Old Trafford, Diallo said: “After waiting since the summer, it is finally a dream come true to complete my move to Manchester United. I am hugely ambitious and there is so much that I want to achieve in the game; when I spoke to the manager I knew that I had joined the perfect club.

“This is a really exciting squad with so many great players, I can promise that I will work hard every day to learn from them and give everything to develop my game. The coaches have been fantastic since I signed, we have been in touch regularly and they have already given me a lot of great advice.

“I have had time to prepare for this move, both physically and mentally, and I have worked really hard to be ready to make the step up to this amazing club.”

I can not wait to start🔴🔴 pic.twitter.com/n0gGrIQGgc