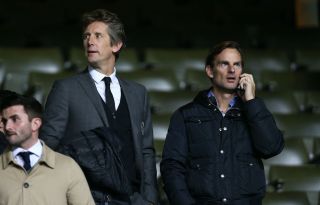 Van de Beek, 23, joined United during last year’s summer transfer window in a deal worth £39m, as per Sky Sports.

However, despite the initial excitement surrounding the midfielder’s arrival, van de Beek has seen his first-team minutes limited.

The 23-year-old versatile midfielder has started just two Premier League matches under Ole Gunnar Solskjaer and de Boer feels that is no where near enough.

However, the latest big name to come out and question van de Beek’s situation is former Ajax star and other de Boer brother, Ronald.

Speaking to Dutch outlet AD (as quoted by Sports Witness) de Boer is concerned van de Beek may miss out on this year’s Euros.

“The European Championship is coming,” de Boer said. “He [van de Beek] will undoubtedly want to be there.”

“Maybe it would be good for him to discuss with the club exactly what they want with him. If the view on playing time does not improve, he may have to declare that he should be rented [loaned] or even sold.

“You have to be lucky every now and then.

“Of course it doesn’t look great now, but with a great performance it can suddenly change completely.

“We also don’t know what’s going on behind the scenes. Perhaps they have made certain agreements with his transfer, they will get him ready for next year this season. That always remains a bit of a guess.”

De Boer later went on to suggest that England’s top-flight football may not be a good fit for van de Beek, he said: “I think his playing style is better suited to the Spanish league than to the English.

“In the Premier League it is often run and fly, in Spain more combination football is played.

“Donny is physically fine. But he comes into his own better in the Ajax game.”