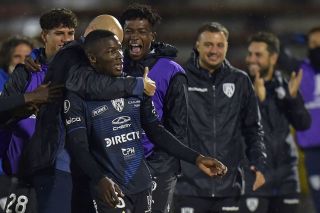 The speculation suggesting Independiente del Valle midfielder Moisés Caicedo could move to Manchester United is somewhat wide of the mark.

Caicedo, 19, has emerged as one of South America’s brightest talents after climbing his way through the Independiente del Valle youth ranks to now becoming a first-team regular.

The talented midfielder has already featured in 31 matches for his side’s first-team and has been directly involved in eight goals, in all competitions.

Caicedo’s impressive breakthrough which has recently included four senior call-ups to Ecuador’s national side has seen the 19-year-old become strongly linked with a move to Old Trafford.

Recent reports from Sky Sports and leading journalist Fabrizio Romano have suggested the Red Devils are weighing up a move for the highly-rated youngster.

Man United are still on the same position regarding M. Aarons and M. Caicedo 🔴👇🏻

Aarons: appreciated but nothing advanced or imminent now.

Caicedo: talks on by weeks, personal terms and club agreement wouldn’t be a problem – next days #mufc will decide if signing him or not.

However, Stretty News understands that whilst United’s recruitment department have recently scouted Caicedo, their interest in the 19-year-old does not extend beyond that.

We understand that United have no plans to open talks with Independiente del Valle, at least during the January transfer window anyway.

There are so many variables involved with a potential deal that suggestions the Reds are ‘locked in’ for talks for Caicedo are wide of the mark, at this stage.