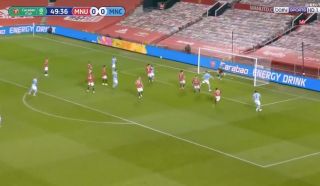 Manchester City lead at Old Trafford thanks to a goal from John Stones.

John Stones wouldn’t be someone many had to score the first goal tonight, but he was in the right place at the right time to find the back of the net as Man City draw first blood in tonight’s Carabao Cup semi-final at Old Trafford.

Manchester United now face an uphill climb to reach the next round, with Tottenham already securing their place in the final.

The goal came from terrible defending on United’s part.

A free-kick entered the box and Ruben Dias caught most of our players’ attention at the back post and allowed John Stones to roam freely in a dangerous area.

Watch the goal below, pictures courtesy of Sky Sports:

It would’ve been harder to miss!