Manchester United’s Dean Henderson has ensured arch-rivals Manchester City did not double their lead at the hour mark after making a brilliant save to deny Riyad Mahrez.

Henderson, 23, was recalled to the United starting line-up to face-off against rivals City in Wednesday’s Carabao Cup semi-final.

Despite being 1-0 down, Henderson has not let his manager down with his latest goal-saving effort coming at the game’s hour mark.

The English shot-stopper made a brilliant leaping save to deny Mahrez who unleashed a thunderbolt. 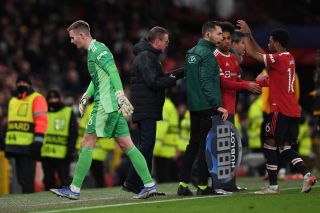 United will know that due to this semi-final being a one-legged tie that they have to up their attacking intent if they’re to reach the final and play Spurs in April.