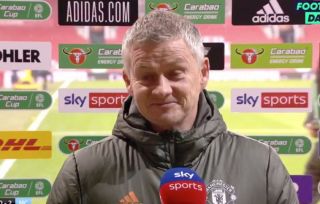 Ole Gunnar Solskjaer was clearly disappointed in his post-match interview with Sky Sports after Manchester United crashed out of the Carabao Cup.

Manchester City were victorious at Old Trafford tonight winning 2-0 to eliminate Ole Gunnar Solskjaer’s side from the Carabao Cup.

Pep Guardiola will now lead his side to a fourth successive Carabao Cup final, against Tottenham in April.

Solskjaer wasn’t happy with United’s defending from set pieces but it’s been a weakness with this side since the beginning of the season.

On top of that, he accepts we didn’t do enough to win the game. Usually we create plenty of chances but that wasn’t the case versus City tonight.

The boss also praised City as the best team in England — but seemed pleased to state that United are better than what they showed against Guardiola’s men in the Carabao Cup last term (again losing the semi-finals).

Solskjaer went on to add that they wanted a final to look forward to this season, but there’s still plenty to play for.

The United players haven’t got any time to dwell. They must move on and look forward to the FA Cup clash with Watford before progressing in the league with fixtures coming up against Burnley and Liverpool.

Watch Solskjaer’s post-match interview can be watched below – pictures courtesy of Sky Sports:

🗣"We wanted a final to look forward to"

Ole Gunnar Solskjaer says Manchester United have to dust the loss off and go again in the PL and Europa League pic.twitter.com/JHoxlogkiV

One response to “Video: Solskjaer disappointed after Man United miss out on place in Carabao Cup final”