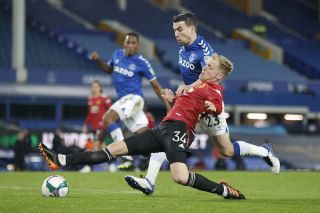 Donny van de Beek would have been hoping for more game time during his first season at Manchester United.

It hasn’t happened that way but I have always maintained that the Dutchman should stick it out a year, work harder than ever before in training and wait for his time to come.

There’s a good chance this will be Paul Pogba’s last season at Old Trafford but that should give Van de Beek a higher probability when it comes to stamping his authority on the team next season.

Solskjaer uses the likes of Fred and Victor Lindelof as examples of players who needed 1+ year to settle at the club. Fred has become an important member of the squad and starts both weeks, whereas I feel Lindelof is still a weakness at the back and it never bodes well when your centre-back isn’t good in the air.

“Donny has played well when he’s had the chance,” he was quoted as saying by the Daily Mirror.

“I think we are too quick sometimes to jump on, ‘Oh he’s not playing, it’s a failure’.

“But with Victor and Fred as examples, it takes a little bit of time and now they are massively important players in our squad, in our team, which will be the same with Donny.

“He has come in and he is in a midfield group there with quality, challenging with Bruno [Fernandes], Juan [Mata] and Jesse [Lingard]. I have loads of No 10s, loads of central midfielders with Paul [Pogba], Nemanja [Vidic], Scott [McTominay] and Fred, and Donny has done well when he has come in.

“He is always ready, he always works hard in training, he’s positive and he will make differences in many games for us this season. He will grow more and more for next year.”

It takes time adjusting to a new team and league. Van de Beek isn’t playing because he lacks the required ability to play for United and he may be the one to step up when Pogba leaves.

Pogba could leave for any club that is willing to meet United’s demands — but the Frenchman needs to perform between now and the end of the season if the Reds are to get a decent transfer fee for his signature.

Time will tell but Solskjaer is right to call for patience. Far too many people have been overreacting about Van de Beek’s lack of game time. We’re winning football matches, remember?!