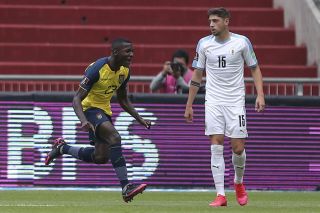 Perhaps a move to a stepping-stone club like Atlanta will give Moises Caicedo more time to develop before making that big move to Europe?

Well, that’s what we are reading this morning as sources tell CBS Sports (as per reporter Roger Gonzalez) that MLS outfit Atlanta United have made an offer to sign the young Ecuador international.

The Metro recently reported that Manchester United and Chelsea were looking to sign the talented midfielder who was expected to cost around £5.5m plus add-ons.

It would be a big scoop for the MLS to land such a highly-rated youngster because it seems he is destined for Europe one day.

This could be his path to achieving that dream one day — instead of moving prematurely which happens to young footballers every year.

But with Manchester United needing a defensive midfielder there’s nothing to suggest they will still be active in the market looking for one in 3+ years, so this may be Caicedo’s one and only chance to join United.

If United wanted a deal they could get one done this month.