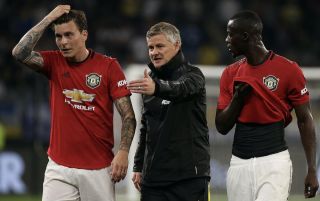 Manchester United defender Eric Bailly is adamant that he is prepared to start against rivals Manchester City in the Carabao Cup semi-final on Wednesday night.

Bailly, 26, joined United four-years ago after making the switch from Villarreal.

Since his arrival at Old Trafford the flamboyant centre-back has grown to become a fan-favourite.

However, a spate of unfortunate injuries have seen his consistent game-time become limited on several occasions.

Despite being brought by Jose Mourinho, now under the guidance of current manager Ole Gunnar Solskjaer, Bailly is currently enjoying arguably his best patch of form in a United shirt.

The Ivorian defender has recently been named in four consecutive United starting line-ups; a first for the 26-year-old since joining the Red Devils.

Ahead of Wednesday’s mouth-watering Manchester Derby which sees a spot in this season’s Carabao Cup final up for grabs, Bailly has spoken of his desire to go again.

At the time of writing this, United’s confirmed team-news has not yet been announced, however, if Bailly’s recent comments are anything to go by, fans should expect to see their pacey defender back at the heart of the Reds’ back-line.