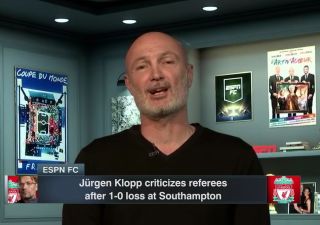 Frank Leboeuf has told Jurgen Klopp to stop making ‘excuses’ after the Liverpool manager accused Manchester United of getting too many penalties in an embarrassing outburst on Monday night.

Jurgen Klopp threw his toys out of the pram after Sadio Mane was denied a spot-kick in Liverpool’s 1-0 defeat to Southampton on Monday night, though he completely ignored that Southampton could’ve had two or three goals in the game.

Instead he used his post-match interview to question the volume of penalties that United are given in comparison to Liverpool.

“I hear now that Manchester United had more penalties in two years than I had in five and a half years,” Klopp said, as per Irish Times. “I’ve no idea if that’s my fault, or how that can happen.”

But former Chelsea defender Leboeuf has called Klopp out on his rubbish and feels the German coach should focus on his own problems rather than what’s happening to other teams.

“I’m really fond of Mr Klopp, I don’t understand what he’s trying to do,” Leboeuf told ESPN. “He doesn’t need to find excuses. This season is a big mess.

“For the penalty excuses, I played from 1996 to 2001 for Chelsea and I kept on hearing that Manchester United had penalties more than anybody else so it’s a long story.

“But I don’t think Manchester United got all those trophies because of penalties more given to them than others.

“So don’t go there. Don’t go there and find something special. Everybody is doing badly and suddenly doing great and they’ll go back to bad or average — it’s what it is this season.

Solskjaer was asked about Klopp’s remarks during his press conference on Tuesday, and said (via GOAL): “And that’s a fact, probably! That’s probably going to be my answer,” brilliantly using the infamous Rafael Benitez line.

“That’s a fact that we’ve got more than him, but maybe they should… I don’t know how many penalties they’ve had.

“I don’t count how many penalties they have, so if they want to spend time on worrying about when we get fouled in the box, I don’t spend time on that.

“I can’t talk on behalf of other managers, why they say things like this.”

Next up for United is Man City tonight in the Carabao Cup semi-finals.

And I’ve no doubt comments like the above from Klopp will be playing in the back of referee’s minds going forward, but as long as they do their job we’ve nothing to be worried about.

With the help of VAR, we’ve got a number of penalties that would have went amiss had referee’s had a naked eye to make their decisions. It’s more advanced than ever before — whether you’re a fan of the technology or not.