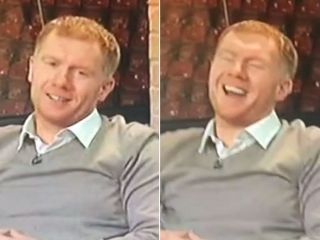 It’s never too early to wind up Liverpool fans.

Jurgen Klopp is cracking and Liverpool are dropping points. At the same time Manchester United are making real progress and have a glorious chance to go three points clear on top in their next Premier League outing.

Like fellow former United players, Gary Neville and Rio Ferdinand, Paul Scholes has took some time out to wind up some Liverpool fans on social media.

The former United midfielder uploaded a video to his Instagram of Reds chanting ‘We’re going to win the league’ inside the Bishop Blaize bar some years ago, knowing it will spark a few nasty responses from any Liverpool fans who follow his account.

Manchester United are currently level on points with Liverpool at the top of the Premier League, but have a game in hand on the Scousers against Burnley next week.

It’s unbelievable when you think how United have played at the beginning of the season as well as other games of late, coming from behind to get wins.

One response to “Video: Paul Scholes’ latest Instagram story is bound to wind up Liverpool fans”