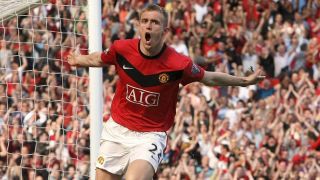 Ole Gunnar Solskjaer is delighted to have Darren Fletcher as part of his backroom staff at Manchester United.

The news was announced this week along with the arrival of Robin Sadler, who has come from Derby County as Head of Rehabilitation % Physiotherapy.

“He’s got the Manchester United DNA and there was a spot open because Mark Dempsey has moved to the academy, we felt he was so valuable there, brilliant in the academy in helping out,” Solskjaer said at his press conference, as per Manchester Evening News.

“When this opening came, Darren has been away from the club for a few years, doing coaching with the 16s and experience of being here through successful and difficult times felt right time. It’s important we bring ex-players that have been somewhere else, I’ve been somewhere else after working with Mike Phelan, Sir Alex and Carlos, different ideas and Fletch put his ideas and will improve us in the backroom staff.”

The midfielder spent many years as a player at Old Trafford and knows what is expected of each individual.

He’s won things under Sir Alex Ferguson and Solskjaer is trying to build a winning side. Coaches who know how to win should help, and he’s already got Mike Phelan and Michael Carrick as part of his staff.