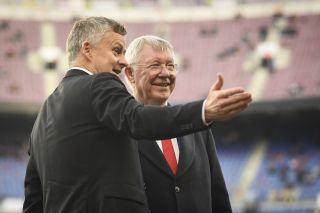 Legendary former Manchester United manager Sir Alex Ferguson has hailed current boss Ole Gunnar Solskjaer for the Red Devils upturn in form, however, the Scot has admitted that lifting this season’s Premier League will not be an easy task.

After hanging up his hairdryer after the Reds’ record 20th league title in 2013, Ferguson now enjoys a much more relaxed lifestyle after opting to take up a director role at Old Trafford instead.

However, despite handing his managerial responsibilities over, Ferguson, like many fans globally is watching on as Solskjaer attempts to restore the Red Devils back to their former glory.

United, under Solskjaer, currently sit joint top of the Premier League, level on points (33) with arch-rivals Liverpool as well as having a game in-hand.

England’s top-flight this season has been and is likely to continue to be unpredictable on a level fans have seldom witnessed before.

Speaking to the Daily Mail about the potential for his former side to mount a serious title challenge, Ferguson was quick to hail Solskjaer for the Reds’ transformation in form, the Scot said: “It’s not an easy road to get back into challenging for the league.”

Ferguson has acknowledged that climbing the table and navigating your way into a potential championship winning position is not easy, especially in modern football.

However, despite this campaign’s exciting nature, one team currently in rock solid form is United who are now unbeaten in their last seven matches, in all competitions.

However, Ferguson went on to hint that winning the Premier League in this day and age is a different proposition to when he managed.

“It’s a difficult league these days,” he admitted.