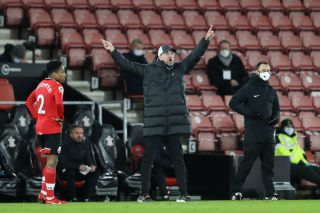 Like all of us at Stretty News, Rio Ferdinand was delighted with the result at St. Mary’s last night.

Liverpool lost 1-0 away to Southampton — their second defeat in the Premier League this season — and it comes after draws against West Brom and Newcastle United.

Referee Andre Marriner was criticised after the match as manager Jurgen Klopp threw his toys out of the pram. Whilst speaking to reporters after the game last night, the manager manager questioned the decision not to award his side a penalty, with a strange reference to how many United have been awarded in recent times.

Liverpool fans may shout about penalties for the foreseeable future, but I watched the game closely and they hardly forced Fraser Forster into making a save…

Former Manchester United centre-back Rio Ferdinand tweeted this gif of himself rubbing his hands captioned ‘Utd squad tonight….’ following the match — and it’s clear the game at Anfield (after United travel to Burnley) is going to be a huge fixture.

It comes at a good time for United seeing as we’re in terrific form at the moment, and seeing Klopp’s outburst last night should drive the lads on wanting to see the German quiver some more.